In 2019, the Cyvia and Melvyn Wolff Center for Entrepreneurship paid tribute to program founder William “Bill” Sherrill, who passed away in September. Shortly after, the Wolff Center was ranked No. 1 in the nation by The Princeton Review, and capped the year with a historic gift expected to have a total impact of $15 million.

The last year has been transformative for the students, alumni, faculty, staff and friends of the Cyvia and Melvyn Wolff Center for Entrepreneurship at the C. T. Bauer College of Business.

In 2019, the program paid tribute to its founder, William “Bill” Sherrill, who passed away in September, and reflected on his vision for the University of Houston’s entrepreneurship program to serve as a model for innovation in the City of Houston and across the country.

In 2019, the Cyvia and Melvyn Wolff Center for Entrepreneurship paid tribute to program founder William “Bill” Sherrill, who passed away in September. Shortly after, the Wolff Center was ranked No. 1 in the nation by The Princeton Review, and capped the year with a historic gift expected to have a total impact of $15 million.

And, just a couple months later, that idea was reinforced as The Princeton Review and Entrepreneur magazine named the Wolff Center the No. 1 undergraduate entrepreneurship program in the United States.

To cap off the year, the program celebrated a historic gift from the Cyvia and Melvyn Wolff Family Foundation that is expected to have a $15 million impact and bolster entrepreneurship education across the UH campus. 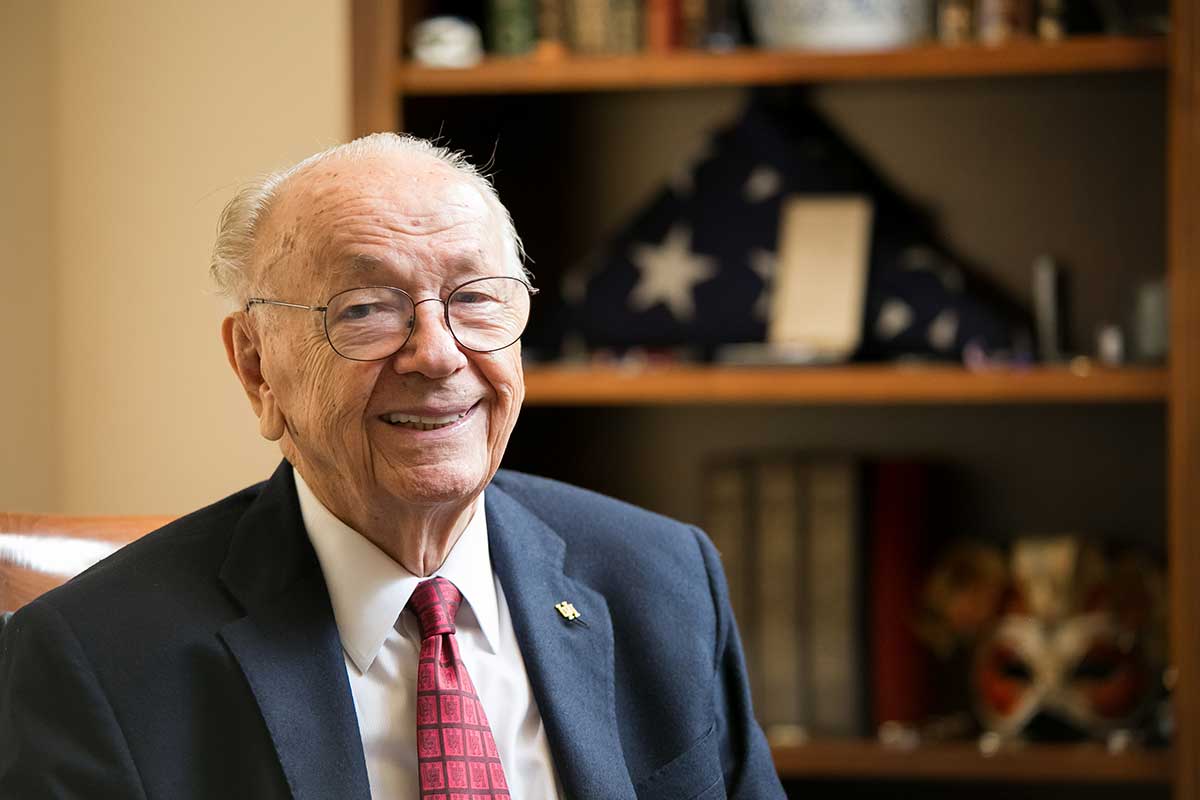 His considerable wisdom and extensive business expertise influenced countless students and imbued the program with some of the intangible qualities he embodied ― perseverance, excellence, generosity and humility.

“By any measure, Bill was an American hero and he is irreplaceable in the lives of our students and stakeholders,” said WCE Director Dave Cook. “His intelligence, wit, kindness and judgement are built into our entrepreneurship program, and his many contributions benefitted our city and our nation. He will be missed greatly.”

Sherrill died Sept. 19, 2019. He was born August 23, 1926, in Houston. At age 15, he joined the U.S. Marine Corps to serve in World War II, and was awarded a Purple Heart for injuries sustained at Iwo Jima. He earned an undergraduate degree at the University of Houston and later received an MBA from Harvard University.

Sherrill’s professional career included serving as chief administrative officer of the city, and working with Judge Roy Hofheinz in the years when the Astrodome was conceived and developed as “The Eighth Wonder of the World.” He served as president of a local bank before launching his own financial consulting firm. At the invitation of President Lyndon B. Johnson, Sherrill twice served on the Board of Governors of the Federal Reserve System. Sherrill also served as Director of the U.S. Federal Deposit Insurance Corporation (FDIC), President of Associates Corporation of North America, and Director of Gulf and Western Industries, Inc.

His passion for entrepreneurship and UH led Sherrill to return to campus to establish what was then called the Center for Entrepreneurship & Innovation in 1993.

“Contrary to popular opinion, entrepreneurship can be learned,” Sherrill once said. “It’s sort of like playing tennis. Not everybody has the ability to go to Wimbledon, but everyone can be taught to play it.”

Sherrill was named the Ernst & Young National Entrepreneur of the Year (Educator) in recognition of the excellence of the center’s model in 1994. WCE has since grown to serve more than 2,500 students across campus and 36 students competitively selected as entrepreneurship majors each year. The Princeton Review and Entrepreneur magazine have ranked the program among the top six undergraduate programs in the U.S. since 2007, usually 1st or 2nd.

Over the years, Sherrill held numerous offices with the UH Alumni Association, and he was a member of the Bauer College Advisory Council under five Deans.

He had a special connection with students such as Wolff Center graduate Alejandro Dolores (BBA ‘18), now a technology analyst at Accenture. Dolores, who was a first-generation college student while at WCE, will always remember Sherrill as a powerful presence.

“Bill was always there for our students, always helping them, always encouraging them to be positive and do their best. For all his achievements, the things I will most remember about Bill are his humility, his loyalty to his students, his school and his country, his unflagging positivity, and his belief that if you do your best, you will have nothing to regret. We will miss him terribly, but with no regrets; he did his best, and we are better off for it. We are lucky we knew him.”

The Cyvia and Melvyn Wolff Center for Entrepreneurship has been named the No. 1 program in the United States for developing undergraduates to become entrepreneurs.

The rankings, compiled annually by The Princeton Review and published in Entrepreneur magazine, were announced on Nov. 12, 2019. The Wolff Center consistently finishes at or near the top of the prestigious list and has been included in the top 10 since 2007. It was ranked No. 2 in 2018. 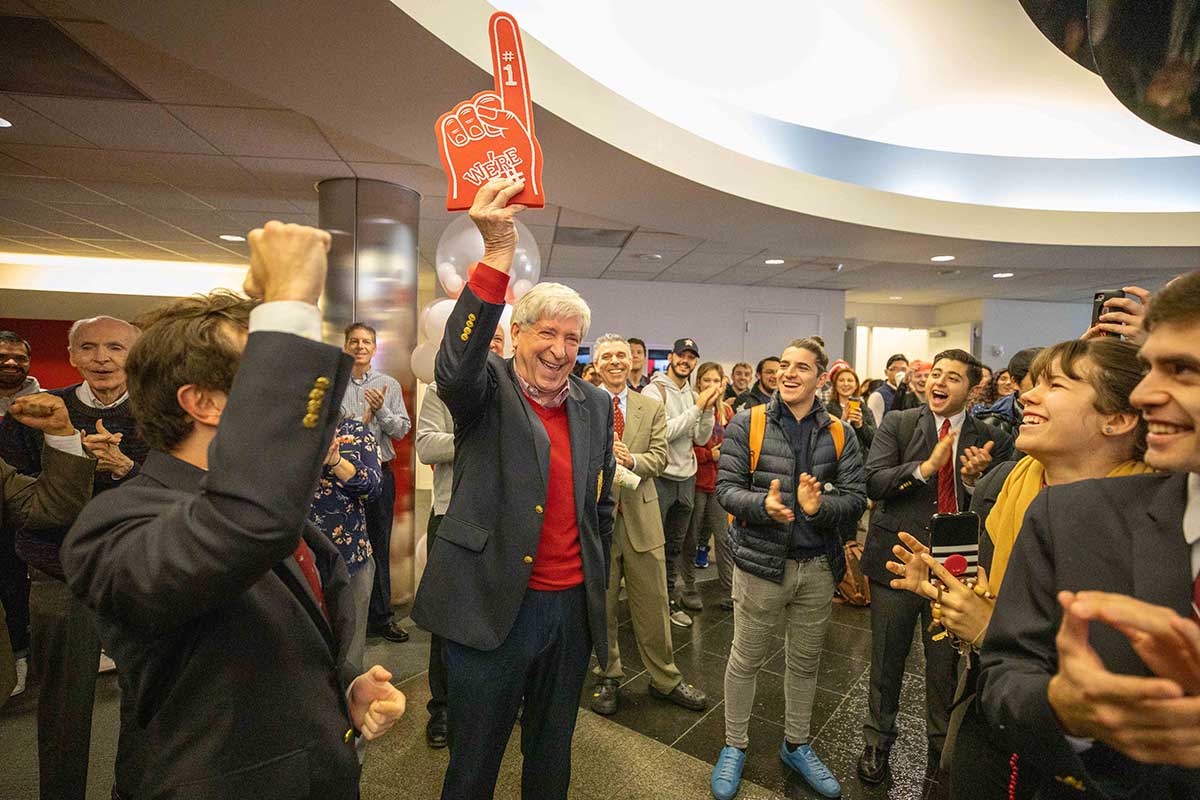 “We are looking for students who are passionate about entrepreneurship, who want to grow personally and professionally,” he said. “When it works, there’s magic in the class. They learn not just from the professors, but from each other.”

Between 35 and 40 students each year are accepted into the program, which was launched in 1994 and named for Houston philanthropists Cyvia and Melvyn Wolff in 2007, but far more students participate in Wolff Center classes. More than 3,000 UH students take at least one entrepreneurship course every year.

More than 1,200 businesses have been started over the past decade by Wolff Center students and graduates, with identified funding of over $268 million.

Paula Myrick Short, senior vice president for academic affairs and provost, said the Princeton Review ranking is an endorsement of the Wolff Center’s programs. “This recognition offers validation for the work the Wolff Center is doing to offer both academic and entrepreneurial opportunities to students at the University of Houston,” she said.

The rigorous program is built on several key experiences, including:

The connections and opportunities offered by the Wolff Center are unmatched, said Tameer Bakkar, a senior entrepreneurship major who has launched a high-end dessert business and is CEO of a Wolff Center team working to commercialize a therapeutic vest designed to ease recovery for patients after breast surgery.

Bakkar said that faculty and mentors at the Wolff Center have been invaluable. His connection with his fellow students has been equally important.

“The Wolff Center family, the 35 people in your class that you can depend on, that can take you a long way,” he said. “I know I’ll be in touch with them for the rest of my life.”

HISTORIC GIFT MADE BY CYVIA AND MELVYN WOLFF FAMILY FOUNDATION

A historic gift expected to have a total impact of $15 million will ensure the Cyvia and Melvyn Wolff Center for Entrepreneurship remains in the nation’s top tier of entrepreneurship programs.

The Cyvia and Melvyn Wolff Family Foundation has given a $13 million gift to UH for the Wolff Center for Entrepreneurship, the nation’s No. 1 undergraduate entrepreneurship program, and the landmark donation is expected to draw an additional $2 million matching grant from the state of Texas, bringing its total expected impact to $15 million. 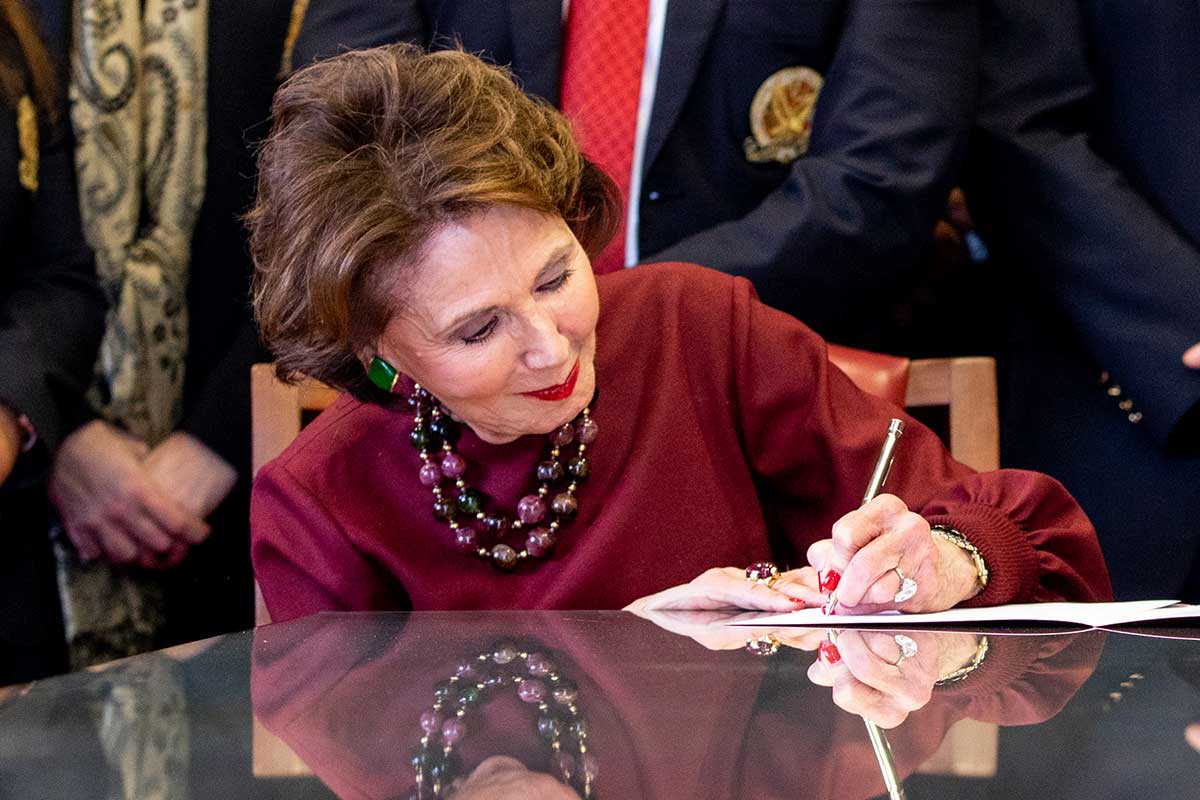 The gift will ensure the Wolff Center remains a priority at UH and continues as a source of leadership and expertise on the topic. It is the second largest gift in the history of Bauer College, which houses the Wolff Center.

“Our family is deeply committed to the ideals of entrepreneurship,” said Cyvia Wolff. “Our business personified everything that it means to be an entrepreneur. The skills, the thinking, the mindset are fundamental to success for business leaders today and in the future. On behalf of my late husband, we are truly honored to ensure the entrepreneurial legacy not only endures but remains accessible for students. We are truly honored to be part of this program and university.”

The Wolff Center was named the No. 1 program in the nation for undergraduate education by The Princeton Review in 2019, and Wolff Center students and graduates have launched more than 1,200 businesses within the past decade. The center is consistently ranked as one of the most innovative undergraduate programs in the world and integrates both the “head” and “heart” of the entrepreneur into the curriculum and immersive experiences.

It was launched in the mid-1990s and named for Cyvia and Melvyn Wolff in 2007, reflecting the deep personal involvement the Wolffs and members of their foundation have had with the program. Melvyn Wolff, former chairman of Star Furniture, passed away in 2017.

The gift comes as the city of Houston is focused on improving the city’s entrepreneurial climate.

“Entrepreneurship is crucial for the future of our country, as well as our city and state,” said UH President Renu Khator. “We are proud to be at the forefront of work around entrepreneurial training and research. The uniqueness of our program has and continues to make it the model program. This extraordinary gift ensures our leadership in this space will continue and will support the creation of businesses, change communities and impact our students’ lives.”

The foundational $13 million gift will be used to create three endowments for the Wolff Center:

The Wolff Center undergraduate program has been ranked No. 1 or No. 2 in the country by the Princeton Review for nine of the past 12 years, and Bauer Dean Paul A. Pavlou said the gift will ensure the programming, mentoring and outreach that has led to such success continues into the future.

“We are passionate about entrepreneurship and how it can forever change students’ lives. We seek to further promote entrepreneurship as a university-wide, even citywide effort, by collaborating within and across the university in a multitude of areas, such as technology, health care, arts and sports,” Pavlou said.

The gift also will allow the program to continue serving a wide spectrum of students: about 2,500 UH students take at least one entrepreneurship course every year, and more than 700 complete multicourse certificate programs.

Students who have taken entrepreneurship classes at UH within the past decade have started 1,270 businesses, with identified funding of just over $268 million.

Dave Cook, who has worked with the Wolff Center for Entrepreneurship since 2007 and was named director in 2017, said the endowments ensure the program will continue to be among the nation’s best.

“What we are doing is transformative in the lives of students, mentors and stakeholders in a way that elevates everyone towards excellence,” Cook said. “The impact of this gift allows us to remain the leader and to move forward with confidence, purpose and permanence.”

The program’s emphasis on using mentors and instructors with real-life entrepreneurial experience won’t change, Cook said. “Our mission is to connect our students with people who have walked the same path the students hope to walk. These are the people who share the values of the Wolff Center, people like Cyvia and Melvyn Wolff.”