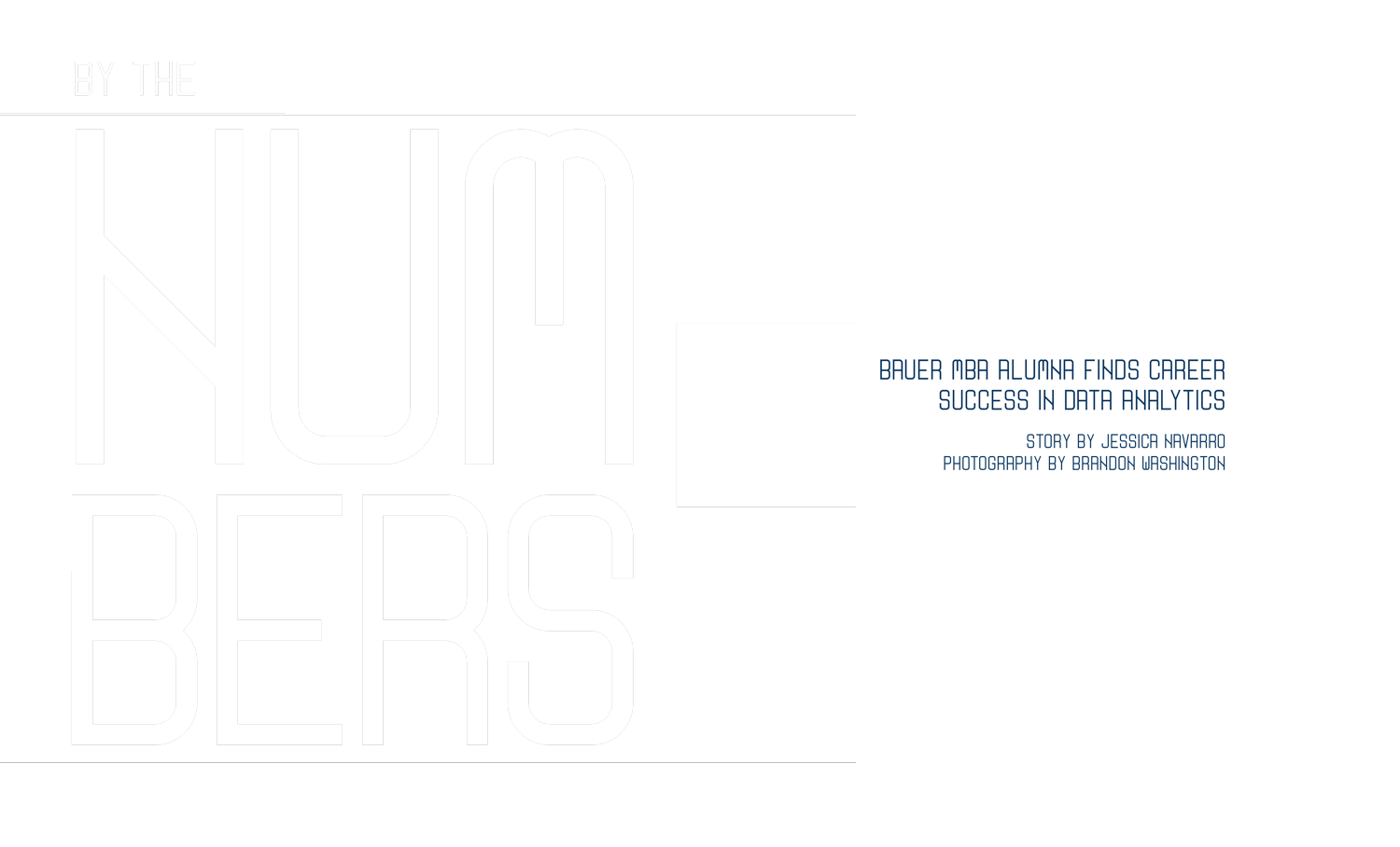 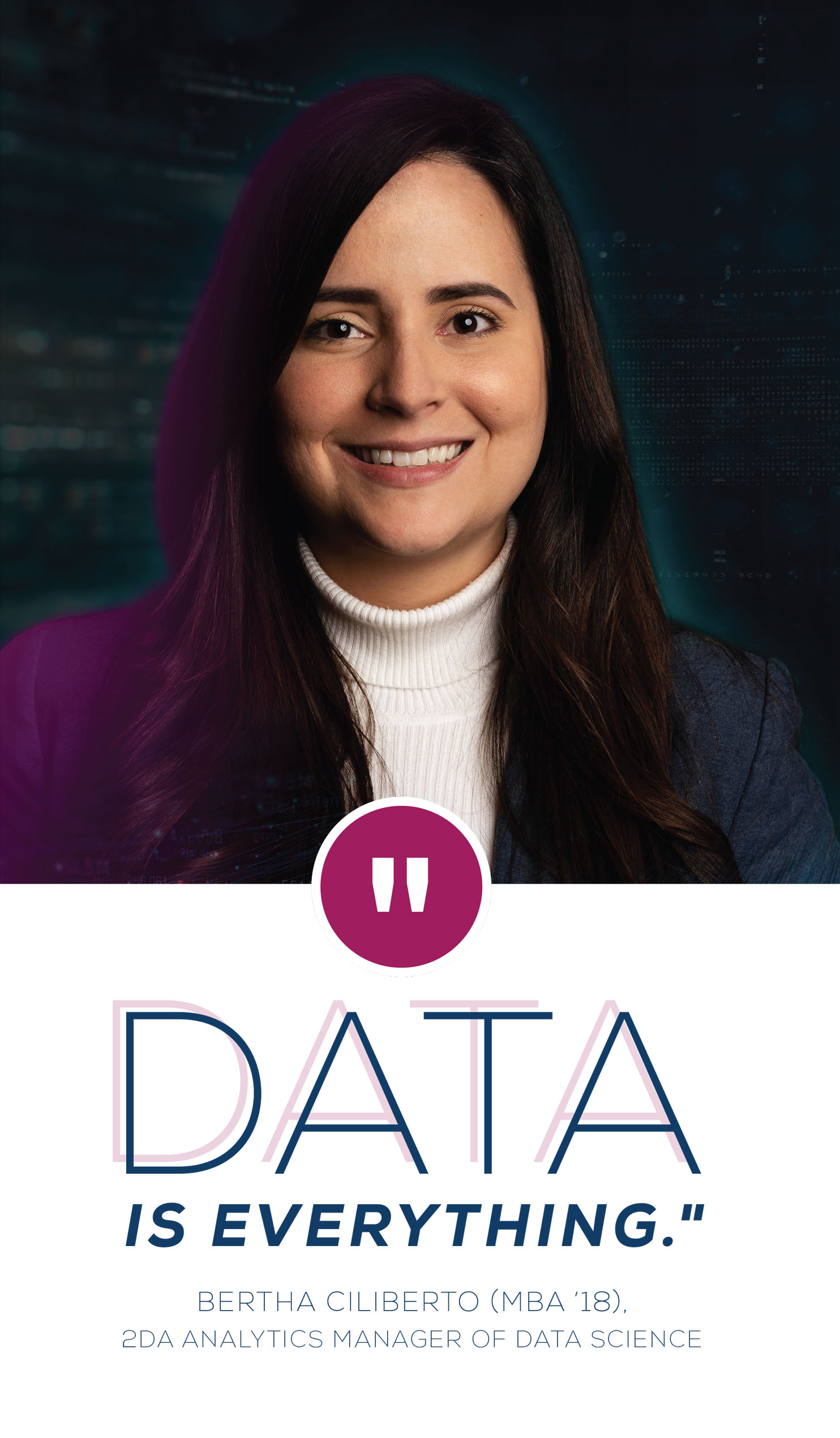 IN HER ROLE AS MANAGER OF DATA SCIENCE FOR HOUSTON-BASED STARTUP 2DA ANALYTICS, BERTHA CILIBERTO (MBA ’18) LEADS A TEAM THAT ANALYZES DATA AND TRENDS TO CREATE BUSINESS MODELS FOR PIPELINE OPTIMIZATION.

Bertha Ciliberto can see into the future.

She’s not a fortune teller or a mind reader, but the recent Bauer MBA graduate can harness the power of data to help businesses make strategic planning decisions.

Ciliberto is part of an emerging group of young professionals making a career of a discipline that is rapidly becoming one of the most critical areas of focus for both industry and academia — data science.

“Data is everything,” she said. “Think about marketing. You can use data you get from your customers to do targeted marketing instead of wasting money in sending advertisements to everyone. You can build a model to tell you who might be interested or prone to buy your product based on different attributes.”

IN HER ROLE AS MANAGER OF DATA SCIENCE FOR HOUSTON-BASED STARTUP 2DA ANALYTICS, BERTHA CILIBERTO (MBA ’18) LEADS A TEAM THAT ANALYZES DATA AND TRENDS TO CREATE BUSINESS MODELS FOR PIPELINE OPTIMIZATION.

After graduating from Bauer College’s MBA program last year, Ciliberto began working as a manager of data science for 2DA Analytics, a Houston-based startup that builds software for pipeline optimization.

“In my area, we use data to optimize the flow of volume,” she said. “If you’ve got thousands of barrels of gasoline going to this location, how much does it cost to get it from A to B, and what’s your margin? Is it better to send from A to C instead? We transform all the data and manage the models we’ve built.”

Although Ciliberto transitioned quickly from graduate school to full-time employment in her field of study, data science — and business school — weren’t always part of her plan. She came to the United States from Venezuela when she was 16 and graduated from the University of Houston in 2014 with a bachelor of science in geophysics and seismology.

“I considered it as my career path,” Ciliberto said. “I’m still a little nerd with rocks and stuff. But the Bauer MBA really transformed what I was doing. It gave me that overarching understanding of business and completely changed everything I knew.”

The truly transformative moment came during a data science course in the MBA program, one she took without much expectation.

“I had no idea what data analytics was,” she said. “But I’ve always had a passion for numbers and math, and I thought I needed to focus on a few different areas in the MBA to have more options.”

The class was led by Ellen Terry, a lecturer who has over two decades of experience working in business intelligence and analytics for companies including Microsoft, GE and JP Morgan.

“I was lucky enough to be in that class, and a couple weeks later, she asked if I would be her TA,” Ciliberto said. “That’s how I got more familiar with data analytics and grew to really love it. And Ellen became a mentor for me, someone I’m still in touch with after graduation.”

Ciliberto cites the courses with Terry as well as predictive analytics with Department of Decision and Information Sciences Chair Norm Johnson as particularly influential in her career transition. Now, Bauer College is launching a new master’s degree in business analytics, something that Ciliberto sees as part of a need in the market for professionals who can make business sense of the growing amount of data generated by new and emerging technology.

“Even a few years ago, data science and analytics weren’t really something I thought of as a career path,” she said. “By exposing students to it, you’ll find people who are passionate about data and can really make an impact through classes and a structured program with access to resources.”