Bauer has taught me to make the most of every opportunity life brings my way and I will forever be grateful for that.

Reading about international business practices in the traditional classroom has its benefits, but what if you had the chance to see it in action?

The students learned firsthand the relationship between Japan and the United States as well as the country’s agricultural trade and economy, manufacturing and entrepreneurial opportunities. They also experienced Japanese culture, customs and cuisine.

Here, they tell the story of their travels from journal entries documenting the trip.

Today, we boarded our flight to Japan! My favorite part was definitely getting off of that 14-hour plane ride! Once we arrived and got settled, I enjoyed exploring the Shibuya District at night! Tokyo at night reminded me of NYC or even Las Vegas. This city is so vibrant, so colorful and always on the go!

The only downside to today was that I was not able to sleep, nor was I comfortable, and I was also very cold, and at times extremely bored. However, for the chance to go back to Japan, I would definitely go through that tiring plane ride again!

Before arriving to Japan, I honestly did not know what to expect on the first day. However, today I was able to really see how Japan has helped to shape the world’s technology landscape. I would often hear how innovative Japan is, but it never really sunk in until I saw it with my own eyes. From the warm drinks sold in vending machines all over the city, to the automatic taxi doors, and even the world famous high-speed bullet trains, all of it truly was a once-in-a-lifetime experience.

Just like my first day in Japan, I did not know what to expect my first year at Bauer. But by joining some of the best student organizations, networking with wonderful individuals, and even becoming part of the Wolff Center for Entrepreneurship, Bauer has taught me to make the most of every opportunity life brings my way, and I will forever be grateful for that. #WhereAwesomeHappens

Today we had to wake up at 6:30 a.m., giving us almost no time to adjust to the time difference. We were introduced to students completing their master’s degrees in business from the University of Michigan, University of Colorado and Vanderbilt University. As the only group of undergraduate students on the trip, we have even higher expectations to represent the respectability of Bauer College and the Wolff Center for Entrepreneurship.

After the program orientation, we met with the Ministry of Foreign Affairs. I was then asked to prepare a last-minute “thank you” speech, but thanks to WCE, I was equipped in public speaking without much preparation. I decided to introduce myself in Japanese, and although my pronunciation was adequate at best, the Foreign Affairs department appreciated my attempt, despite it being out of my comfort zone.

Soon after, we got lunch at a traditional restaurant that required us to remove our shoes and sit on the ground. Everyone was given chopsticks, but some people requested forks. Being vegetarian, eating in Japan has been a challenge for me because almost every meal seems to be prepared with fish sauce. I was served steamed vegetables in vegetable broth, which was filling but not as tasty as some of the other Japanese food. We then went to the Ministry of Agriculture, Forestry and Fisheries and learned how Japan has a shortage of food because the country has to import the majority of its meat. The Ministry of Economy, Trade and Industry also spoke to us the imported goods, and we were shocked at the number of everyday goods needed to be imported, impacting the cost of living and family growth of Japanese people.

Bauer gave me the confidence to stand up and speak without much preparation. Before we left for Japan, Associate Dean Frank Kelley spoke to us and showed us how to give and receive a business card with two hands and to do a slight bow for respect to meet the standards of Japanese professionalism. I am blessed to be part of the Wolff Center for Entrepreneurship. 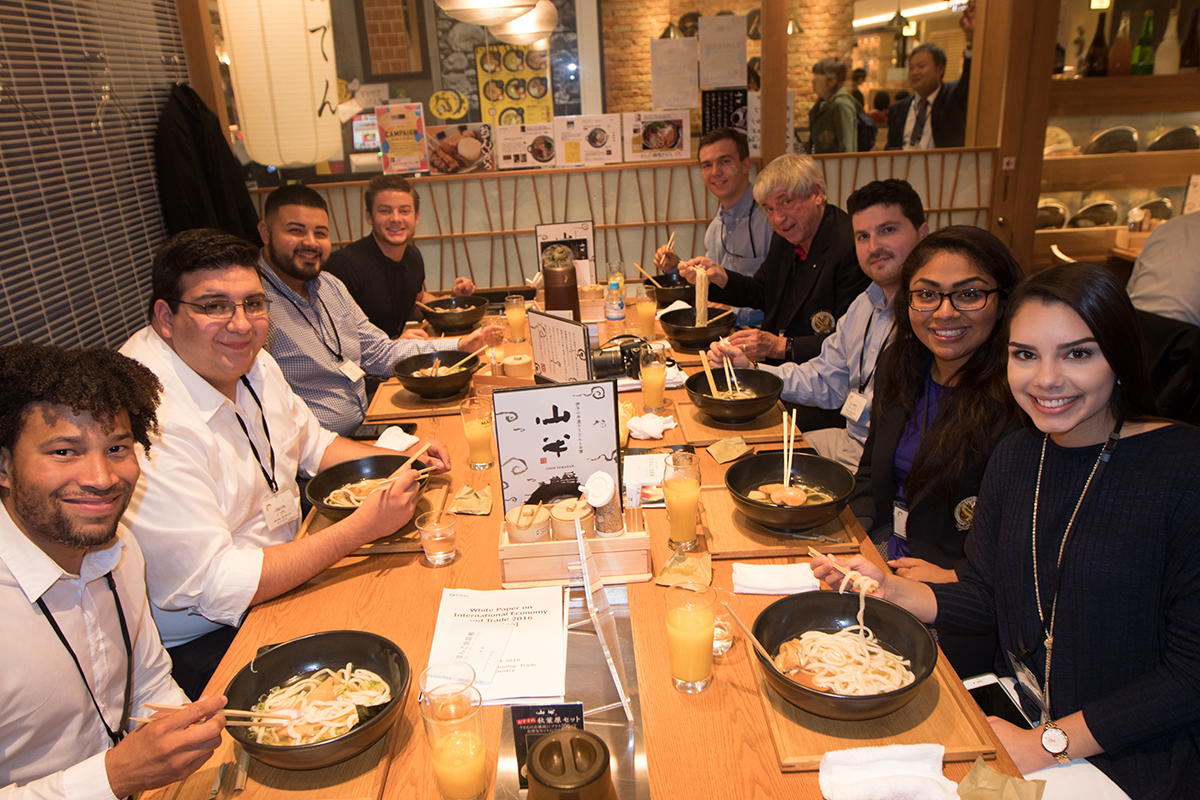 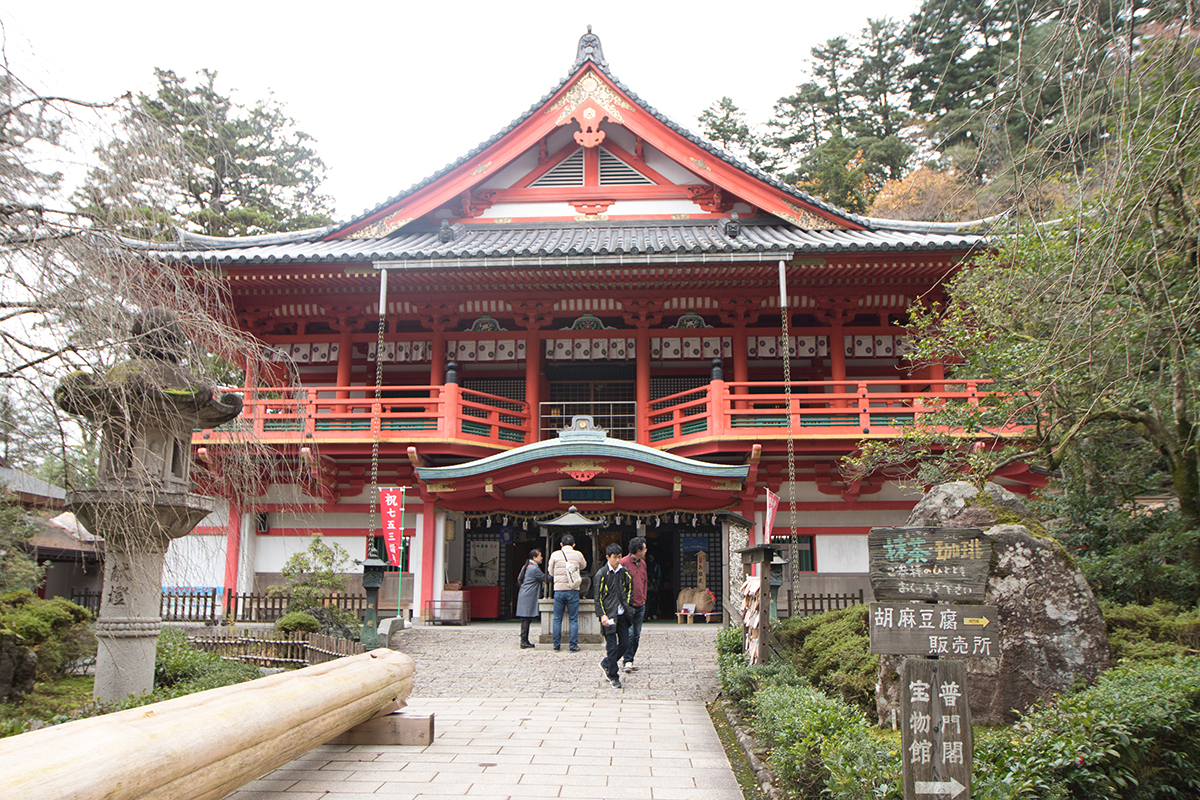 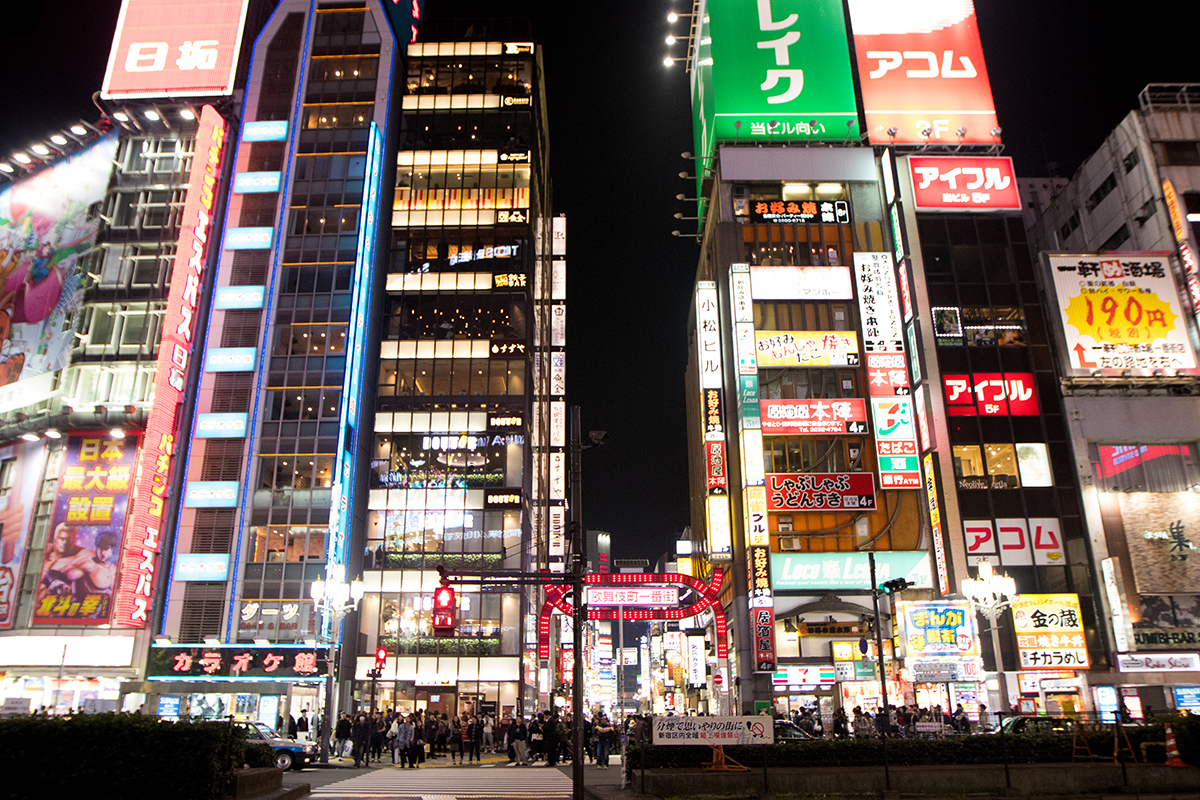 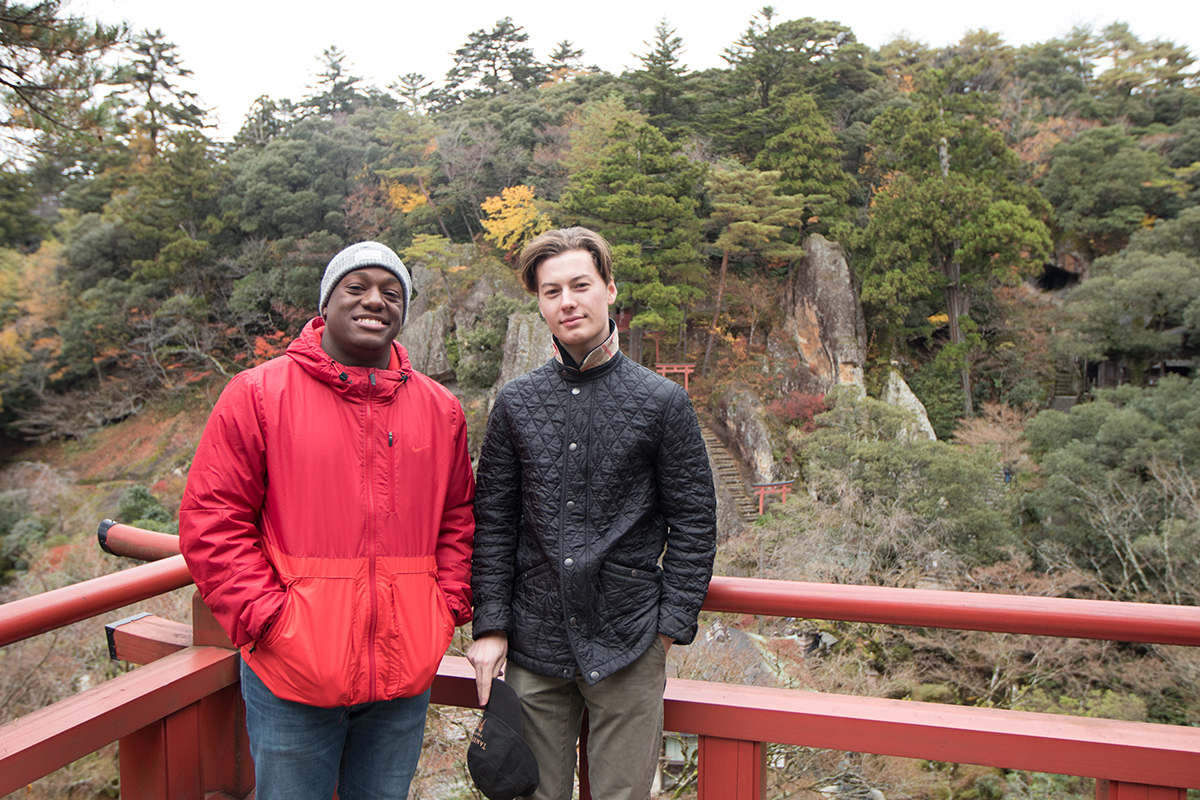 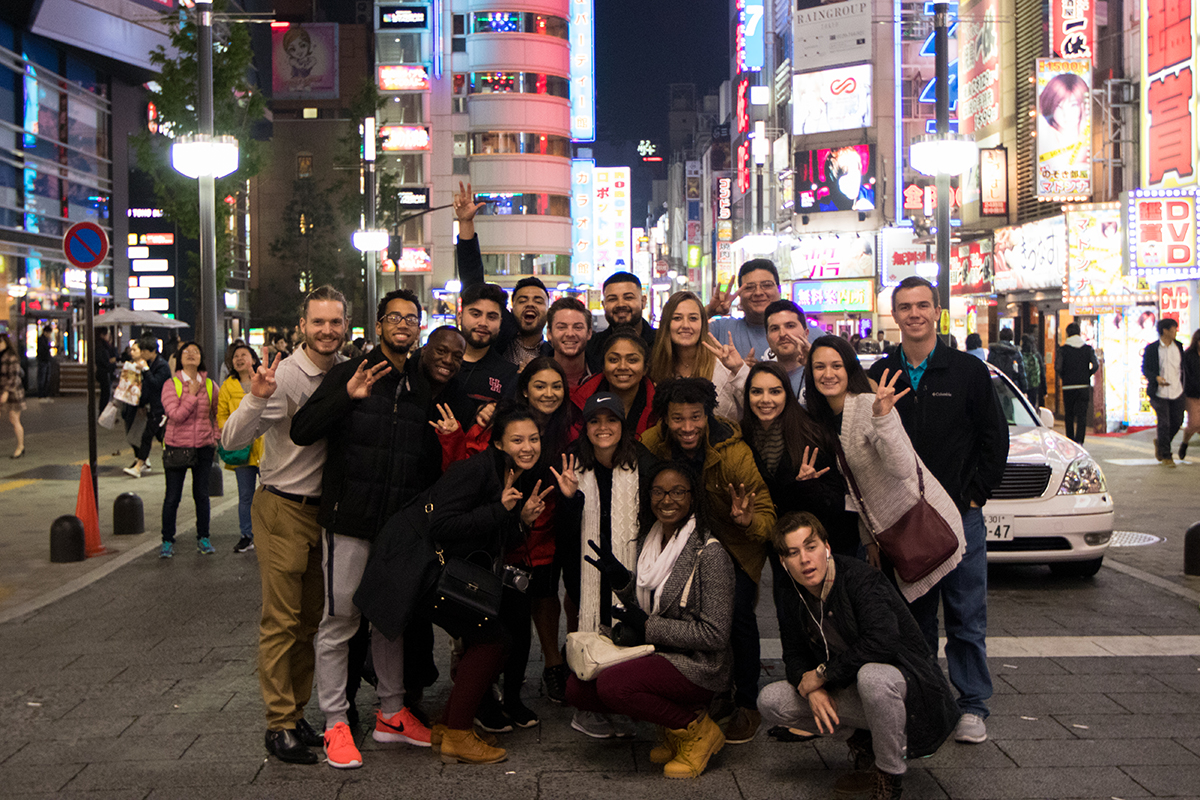 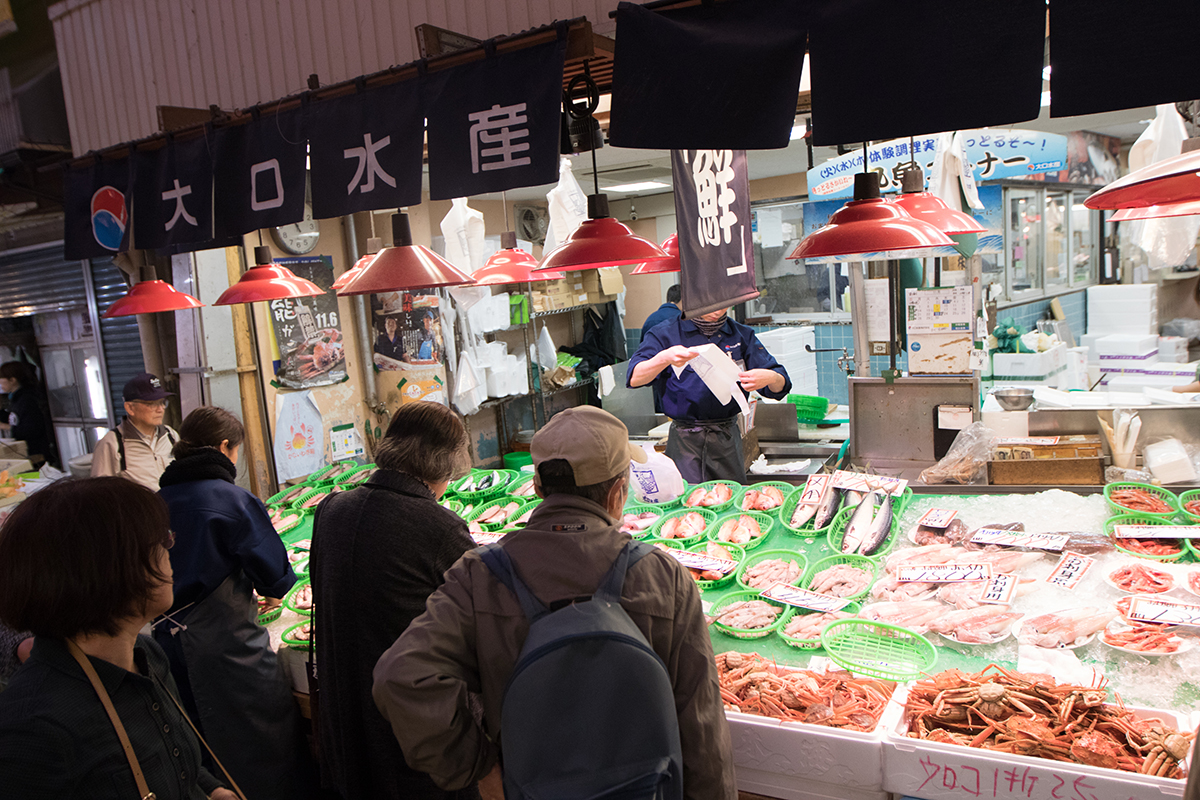 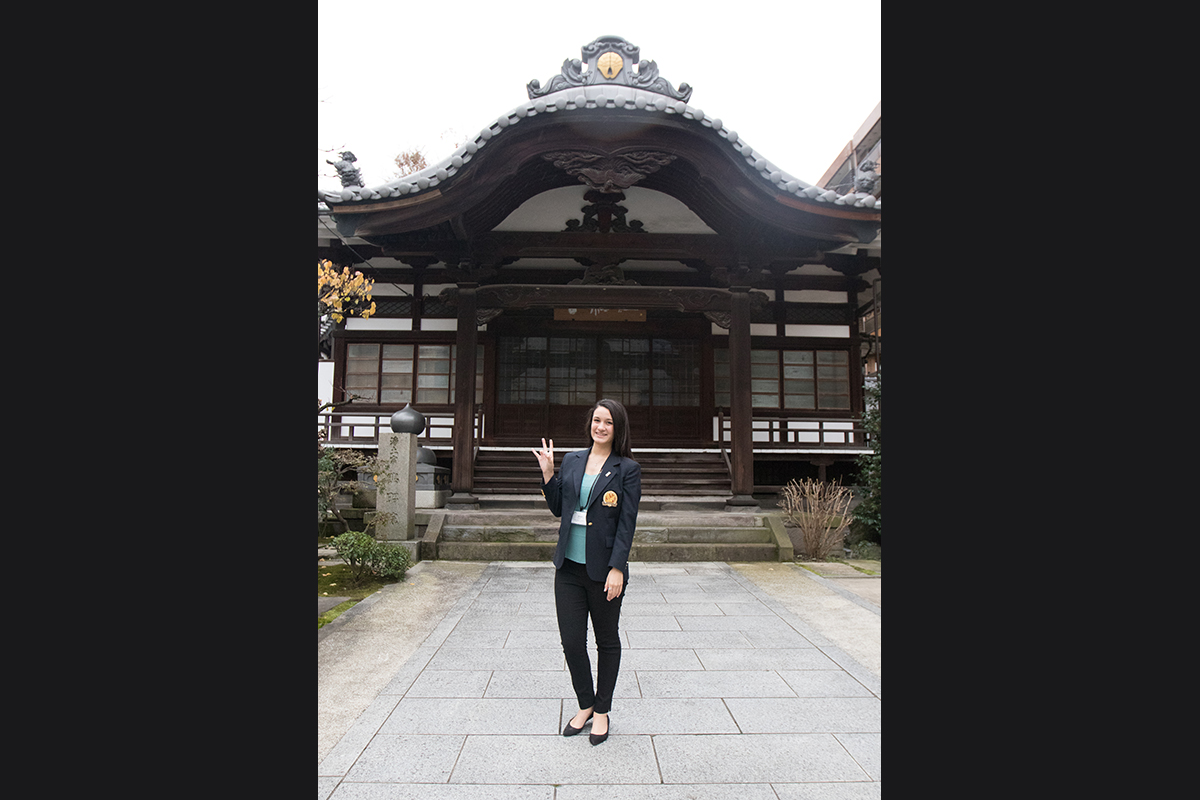 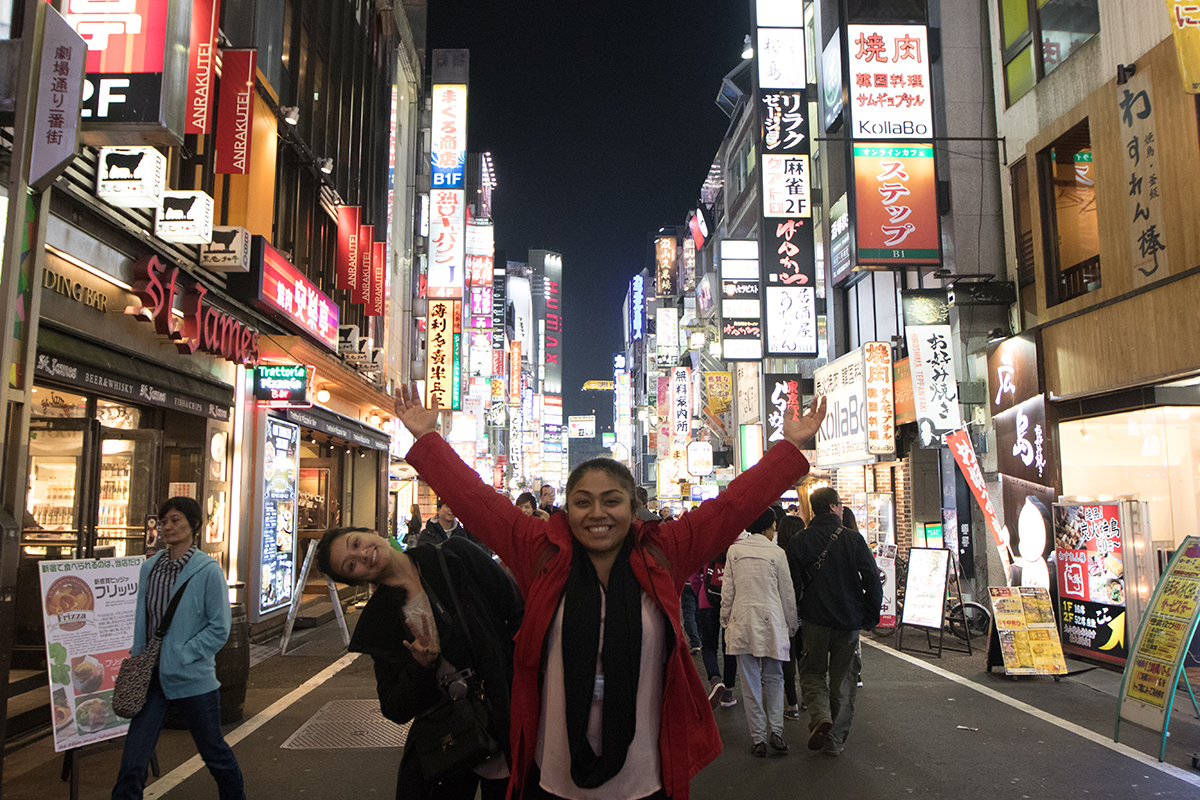 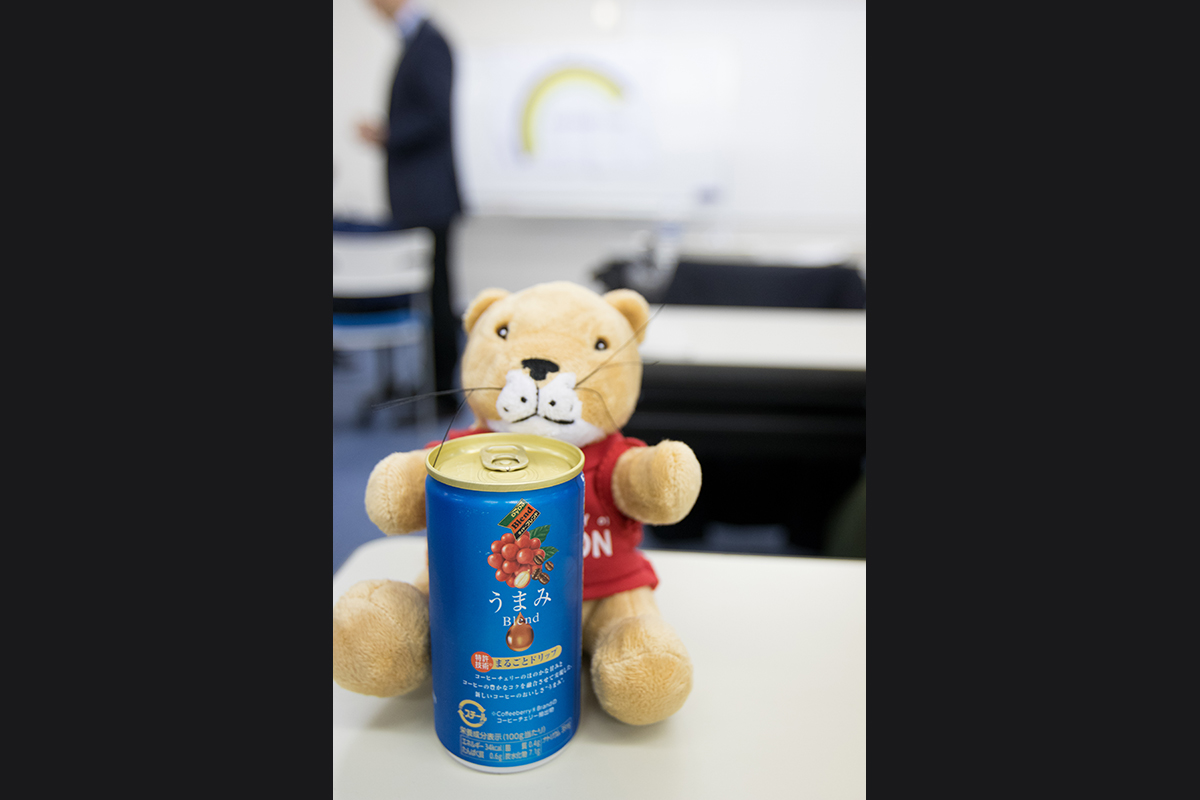 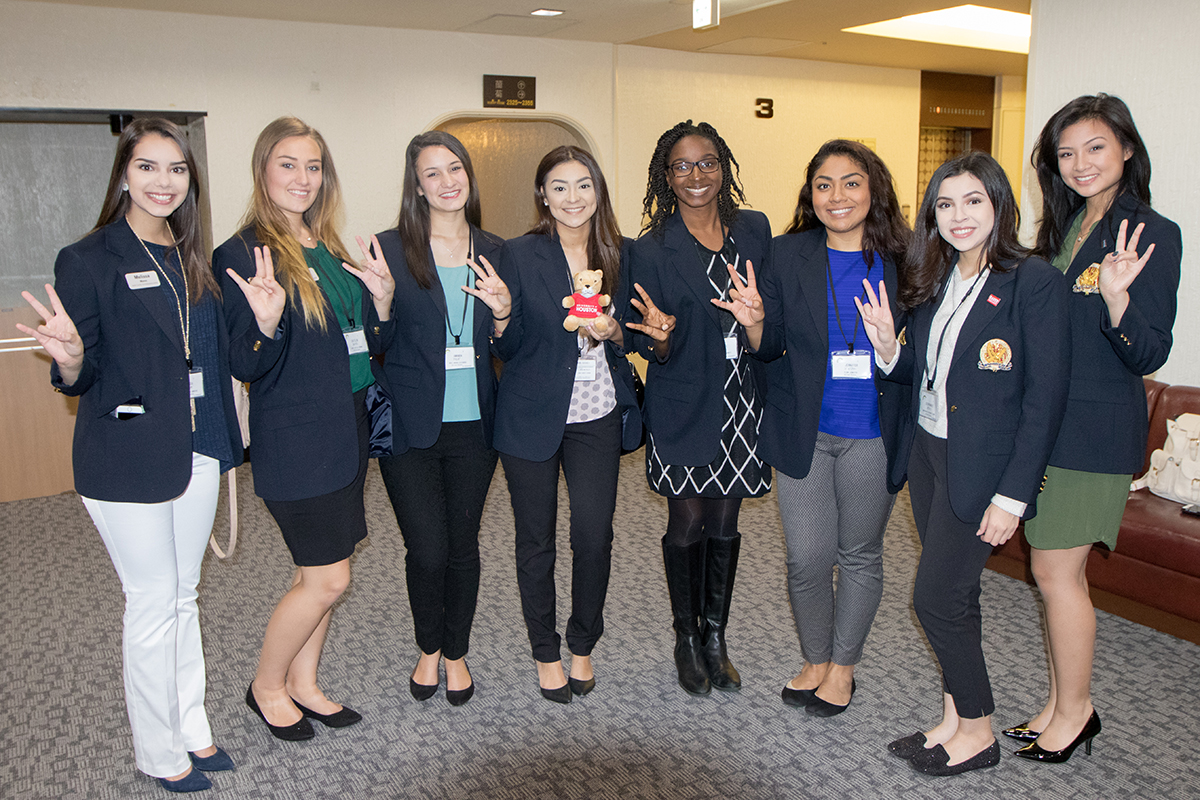 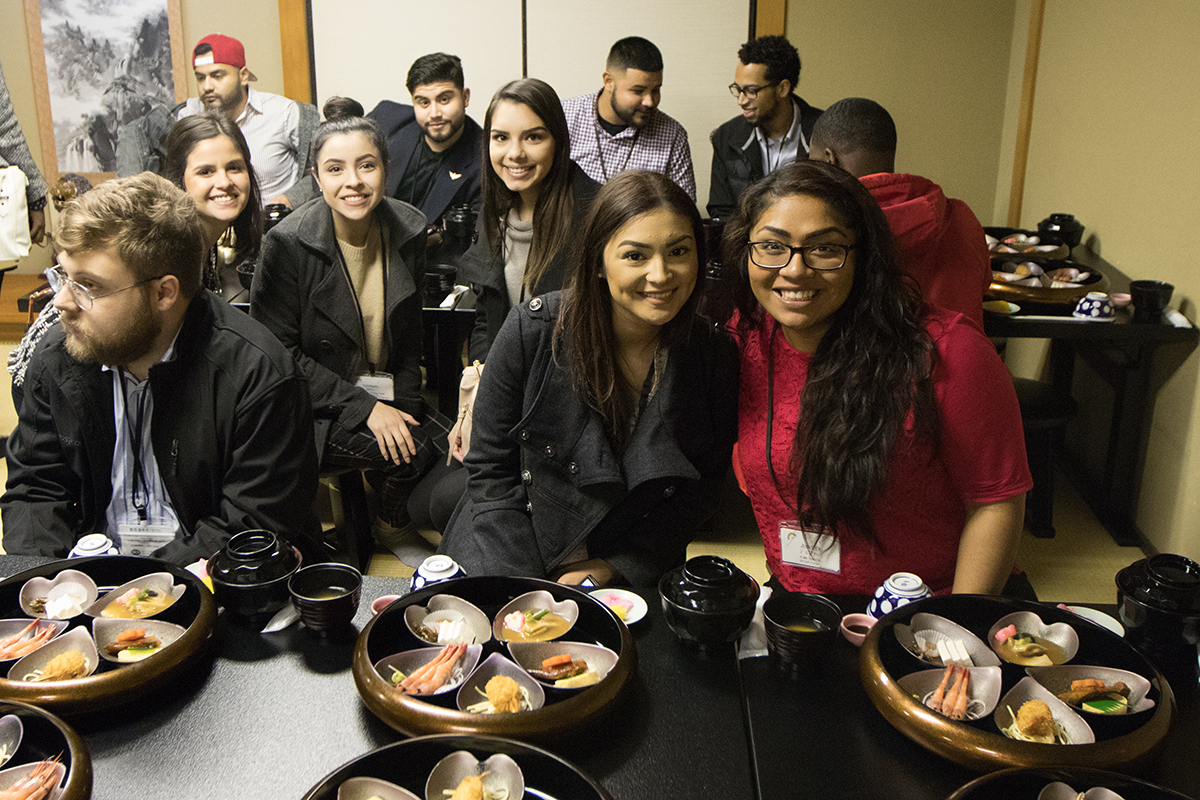 STUDENTS FROM THE WOLFF CENTER FOR ENTREPRENEURSHIP TRAVELED TO JAPAN IN NOVEMBER AS PART OF THE KAKEHASHI PROJECT, WHERE THEY LEARNED ABOUT INTERNATIONAL BUSINESS, JAPAN’S ECONOMY AND EXPERIENCED THE CULTURES AND CUSTOMS.

Today was absolutely stunning. The day started with me sleeping through a 7.8 earthquake that might trigger a small tsunami, but fortunately, we’re flying to the other side of the country. Once we landed, a bus shuttle will take us to the fish market, a huge sprawling open air market with all the sights and smells you would expect.

I was supposed to find out how expensive raw wasabi was. It was 9,000 yen/kilogram. Oy. Near the edge of the market, I found some excellent grilled grouper in a terriyaki glaze. I also joined up with some others and tucked in for some sushi and tea. After that, the bus shuttled us to a restaurant in an ancient-looking building built into the side of a hill.

After our very traditional meal (I just ate rice), we were given time to explore and we found out that the restaurant was next to a stunning place that had an excellent view of the hilly terrain. We are on our way to a government building to meet up with our host family.

There is a lot of space in Japan, but very little wasted space. As we rode along in the bus, I did not see one acre not given to some sort of agriculture.

Everyone left yesterday with their host families. I don’t know what they did, but I knew I didn’t want to leave. Today, I was fortunate enough to share my singing with the 12 families and my classmates in a talent show. Corey Greene also danced and a Japanese drum team performed. The host moms also sang. Larry and Forest were called on stage to hold yuzu (lemons) while she sang a Japanese folk song. It was hilarious to watch Forest stand awkwardly and confused! The best part is when everyone gathered in a line and did a traditional Japanese drum dance.

We also had to say goodbye to our host families today. Some families really connected to us, to the point where they cried. One family consisted of two boys, younger than the age of 5, with a painted face. I was happy to see Jonathan and Emmit with painted faces as well. You could see and feel the difference between the night before and tonight…Everyone was a lot closer.

The most important thing that I’ve learned today is that it doesn’t matter where we come from…They welcomed us as if we were already family. I also learned that the Japanese know how to throw a good party.

One other thing I know is that if it weren’t for Bauer, I wouldn’t have been as useful of a member in the Kakehashi Project. Through my experiences with WCE and Bauer’s Program for Excellence in Selling, along with all the student organizations I’m involved in, I feel prepared professionally—when we discussed economic issues and suggestions, I could not only understand the jargon but I could contribute!

Today I gave a welcome introduction for a business networking luncheon in Japanese. Our guide, Yamamoto, wrote the speech out phonetically for me. Of course, the honored guests were not aware of that. It was an exhilarating way to immerse myself into an international professional culture.

We had some issues with our hotel accommodations for tonight, but the Japanese consulate veraciously remedied this and within the hour, we were in a very nice hotel that exceeded expectations.

Today, I learned that Japanese professionals and business owners, regardless of their reach, are eager to form strong relationships with foreigners. They were engaged and enthusiastic in every conversation and made purposeful efforts to establish communication with us.

My experiences in Bauer student organizations as an officer, as well as my time in the WCE, gave me the confidence and practice necessary to have efficient and meaningful conversations. I was able to ask the right questions, use effective body language and keep the other party invested in the conversation.

Today we visited two companies. The first company was called PFU, which is part of Fujitsu. This company has the highest market share in the world on scanners. They are so ahead of everything else I have ever seen. They also showed us their new device that scans photos directly to your iPhone without glare, but it is currently only sold in Japan.

After learning about this company, we went to Yamato in the city of Kanazawa. This company was literally its own park, and the architecture was so different than what we are used to in the United States. Yamato is where miso and soy sauce are made from scratch and aged for many years. We learned the history of this industry and learned ways to eat healthier.

The owner was so kind and then showed us another use for the miso he makes. He had a huge bowl of what looked like water in front of him the whole time he spoke to us. He then explained that it is aged miso and is great for making skin smooth. He invited each of us to take turns putting our hands and arms into this steaming hot aged miso for one minute and then to tell him how they felt afterwards. My hands have never been so smooth!

Towards the end of our visit there, he explained the many experiments he had done with soy sauce to find uses for it. One that he loved was soy sauce on ice cream because of the sweet and salty taste. Although it sounded so gross, most of our class decided to try it. In all honesty, I can absolutely say it was amazing, and I will be sure to try it again. He sent us all home with some of his aged miso.

I will start by saying that today has been a crazy day. Yesterday, we were tasked with writing a 10-minute speech about our experiences, findings and how we plan to share it all with the Japanese Consulate. I was chosen amongst my classmates to deliver this speech. So, last night, five of us stayed up until 2 a.m. writing and perfecting the speech.

This morning, I woke up to the panic of Dave Cook who told me that our “perfect speech” was nowhere to be found on his computer or the flash drive. With that, Dave and I have been scrambling to remember and rewrite the speech. We have been on a plane, bus and various venues today trying to finish the speech, which had to be delivered tonight!

In what seemed like a miracle, Dave and I not only finished rewriting the speech, but made it even better! I delivered the 10-minute speech to the Japanese consulate to the best of my ability. My favorite part of today was standing in front of the large crowd and delivering the speech (despite the butterflies in my stomach).

Today, I learned that when things don’t go as planned, put your energy into finding a solution instead of worrying and thinking, “What if?” Keep moving forward and you will accomplish your goal!

Bauer helped me prepare for this experience by helping me gain the confidence to speak in public. Overall, this was an incredible experience. I learned so much about myself and how to react in stressful situations.