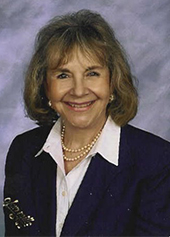 Dr. Bette Ann Stead is professor emerita of the C. T. Bauer College of Business, University of Houston, where she taught for 34 years. Dr. Stead's numerous articles have been published in the Academy of Management Journal, Business Horizons, Group and Organization Management, IEEE Transactions on Engineering Management, IEEE Transactions on Professional Communication, Journal of Business Ethics, Information and Optimization Sciences, Journal of Library Administration, Journal of Nonprofit & Public Sector Marketing, Library Quarterly, Vital Speeches of the Day, etc. In 1978, she co-authored Business English and Communication (McGraw-Hill). Also in 1978, Stead published the first edition of Women in Management (Prentice Hall, 1985, 2nd ed.), which she used in her "Women in Administration" course.

In 1975, when Dr. Stead began teaching her groundbreaking course, "Women in Administration," women were denied membership in business and service organizations. On March 31, 1981, Dr. Stead presented a suggested constitution and bylaws to representatives from 20 business and scientific women's organizations, which was used to establish the Federation of Houston Professional Women (FHPW), in September of that year.

In 1989, while serving as the Director of the Institute for Business, Ethics, and Public Issues in the (now) Bauer College, Dr. Stead presented a concept statement suggesting that the business school could bring together company representatives to discuss ethical concerns. There was little interest at that time. In 1995, she again presented her idea for the establishment of the Greater Houston Business Ethics Roundtable (GHBER). This time, Dr. Stead did receive a positive response from major corporations in the Houston area, and shortly thereafter GHBER was established to highlight the pivotal role of ethics in the workplace and to share "best practices." In 1999, GHBER presented Dr. Stead with the "Dedicated Service Award" for her efforts in creating this organization. In 2006 on GHBER's Tenth Anniversary, five $1000 scholarships were named in her honor. "The GHBER Bette Stead Scholarships" recognize her tireless dedication to education as well as the decisive role she played in establishing this organization. Numerous major corporations belong to GHBER today.

In 1999, Dr. Stead wrote a proposal for a capital campaign and is now recognized as the architect of the capital campaign proposal that culminated in C.T. Bauer's $40 million endowment of the University of Houston's College of Business Administration.

Dr. Stead has received the Distinguished Faculty Member Award from the C. T. Bauer College of Business Alumni Association; Melcher Faculty Service Fellow for outstanding service productivity and contributions to field, 1992-1993, 1993-1994, 1996-1997, 1997-1998, 1999-2000; Melcher Award for Excellence in Service for accomplishments and contributions in all dimensions of professional service, 1995; Senior Service Award for outstanding service as mentor, scholar, and role model, Women in Management Division, Academy of Management, 1992. In 2004, she was named a Distinguished Alumna by Lamar University, and in 2011 was the first woman named to the Lamar University, College of Business Hall of Fame. In 2010, she received the Mayor's Volunteer Houston Award for community development.

She has endowed three memorial scholarships in the C. T. Bauer College of Business at UH and three memorial scholarships in both the Lamar University College of Business and the McCombs School of Business at The University of Texas School of Business, honoring her aunt, paternal grandparents, and parents. The Bauer Scholarships are managed by the Cougar Investment Fund, L.L.C., which allows graduate students to gain valuable experience in money-management. In 1970, Dr. Stead guided the work that won the MBA Magazine award for best graduate research by a business student in the U. S., in 1972 she was a participant in the "Global Strategy Discussions," Naval War College, Newport, Rhode Island, and in 1976 she was invited to the White House to attend the International Women's Year report ceremony presentation to President Gerald R. Ford.