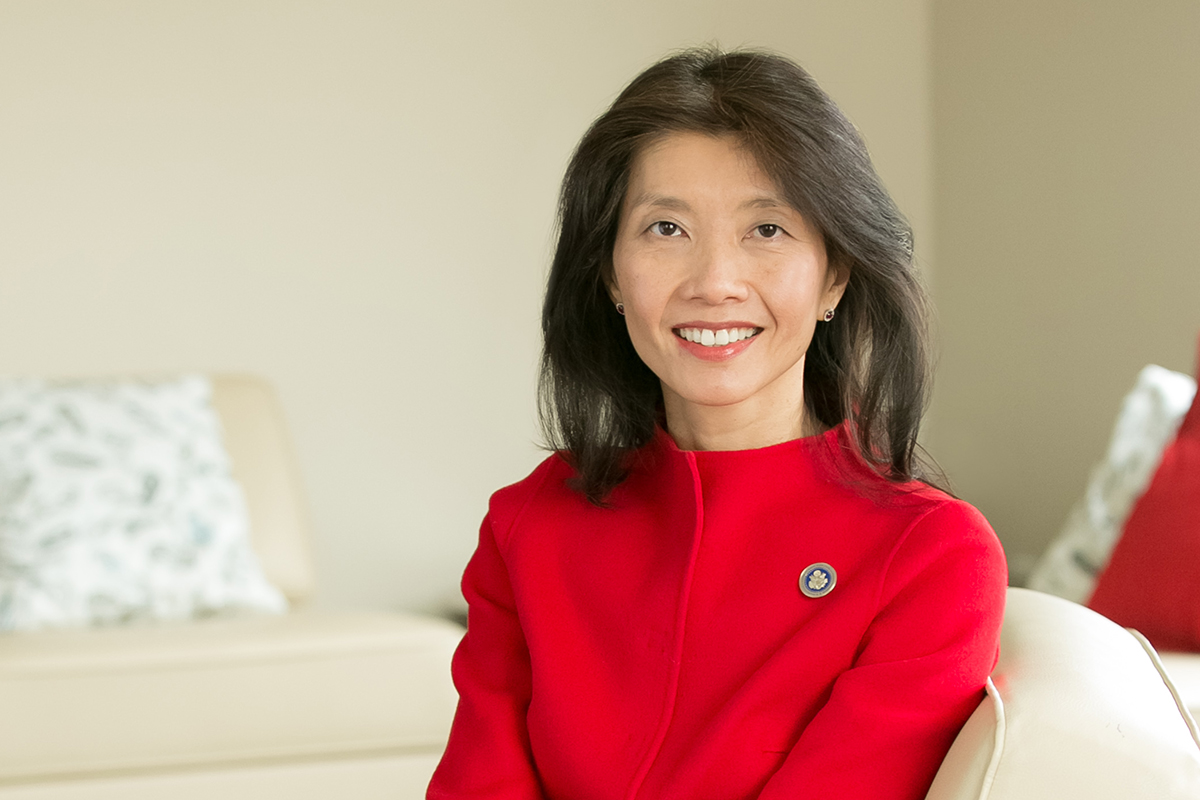 HOLLY HAM (BBA ’94, MBA ’04) WAS RECENTLY APPOINTED TO SERVE AS EXECUTIVE DIRECTOR OF THE WHITE HOUSE INITIATIVE ON ASIAN AMERICANS AND PACIFIC ISLANDERS AFTER A LENGTHY CAREER IN THE PRIVATE SECTOR.

Bauer provided ample opportunities to get involved, take leadership roles and connect with students and communities.”

Holly Ham is executive director of the White House Initiative on Asian Americans and Pacific Islanders (AAPIs), housed in the U.S. Department of Education in Washington, D.C.

Ham (BBA ’94, MBA ’04) consulted and served in leadership roles for HP for more than 18 years. She also had many volunteer roles, including chairman of the Board of Directors for Skills for Living and co-founder of Greater Houston Asian Women Empowered.

We recently chatted with her about her journey from Houston to the White House and how she’s working to make impactful changes.

Q: Can you please share some of your personal background growing up in Houston?

A: My family fled Vietnam in 1979 after fear that the new communist government would persecute families of Chinese descent and a longing for life without oppression after the end of the Vietnam War. With five young children in tow, my parents boarded a ship and left Vietnam. We landed in Indonesia and lived as refugees on the island for six months awaiting sponsorship to come to the United States. After arriving in Texas, both of my parents were fortunate enough to find jobs to start building a new life for us in America. My father, who owned a small auto parts supply business in Vietnam, took his mechanic skills to an oil and gas supplier as a machinist. My mother found work on an assembly line at a food processing plant. They worked hard, brought home a steady income and acclimated to a new land, a new language and a new culture.

Q: How did you transition to your current role as executive director of the White House Initiative on Asian American and Pacific Islanders?

A: After the presidential election in November 2016, I was asked to serve in the new Trump administration. Having spent the last 10 weeks of the campaign as an adviser to the data operations team, I felt no greater pride than to serve my country. I was sworn in as a Special Assistant to the Secretary of Education in January and was one of the first members of the administration to arrive in Washington D.C. to start the transition work. Secretary Betsy DeVos was not confirmed until Feb. 8, so it was up to our team to learn and start leading. Shortly after Secretary DeVos arrived, she asked me to fill the role of the Assistant Secretary for Management, the corporate world equivalent to a Vice President for Operations. I was honored and felt extremely humbled to serve in a high-ranking capacity. I served in that role until November, when the President reappointed me to my current role as the Executive Director for the White House Initiative on Asian Americans and Pacific Islanders.

Q: What aspects of your business and technology background continue to ground you as a public servant in the midst of a tumultuous political climate?

A: In the private sector, there were occasions when I felt that I didn’t fit in. It was a “club” that I felt was not right for me. But every time I was challenged that way, I found a way to “fit” in. And that was to stay focused on the objective and goals — and let the rest of those “feelings” be second priority to getting the job done. The political climate in D.C., especially in the transition year (2017), was just like that. Moving to Washington. D.C., and finding a way to “fit”, was challenging. As a public servant, staying focused on mission and reminding myself that I was asked to serve because the President knew that our country needed leaders outside of D.C. to make impactful changes was important.

Q: What connection is there between your education at Bauer, your roles in corporate America, and now public service? How was your visit back to Houston in January?

A: I had a terrific education at Bauer, both from an academic and a non-academic perspective. My major was Management Information Systems — quite relevant in the early 1990s for someone who was analytical and wanted to apply coding to the corporate world. As busy as all students are, I felt that being involved in student organizations and taking advantage of the Houston business landscape was a great opportunity to get a head start on my career. Bauer provided ample opportunities to get involved, take leadership roles, and connect with students and communities outside one’s area of study.

Coming “home” was special and the reception was incredible. It was wonderful to reconnect with leaders I’ve worked with in various capacities over the decades and to make new connections as well. Our focus for Houston was Hurricane Harvey relief, higher education and tax reform. We visited seven organizations and hosted a community reception and networking event attended by over 80 AAPI leaders. We engaged in discussions about immigration, housing, healthcare, civic engagement, jobs and the economy. My visit to the University of Houston was the highlight of the trip. We visited the College of Education, the College of Technology, and Bauer College of Business. Sharing my journey, education, and path from a software engineer to political appointee was a wonderful way for me to connect with students. A special highlight was seeing Dr. Renu Khator and Dr. Suresh Khator when they stopped by at Bauer.