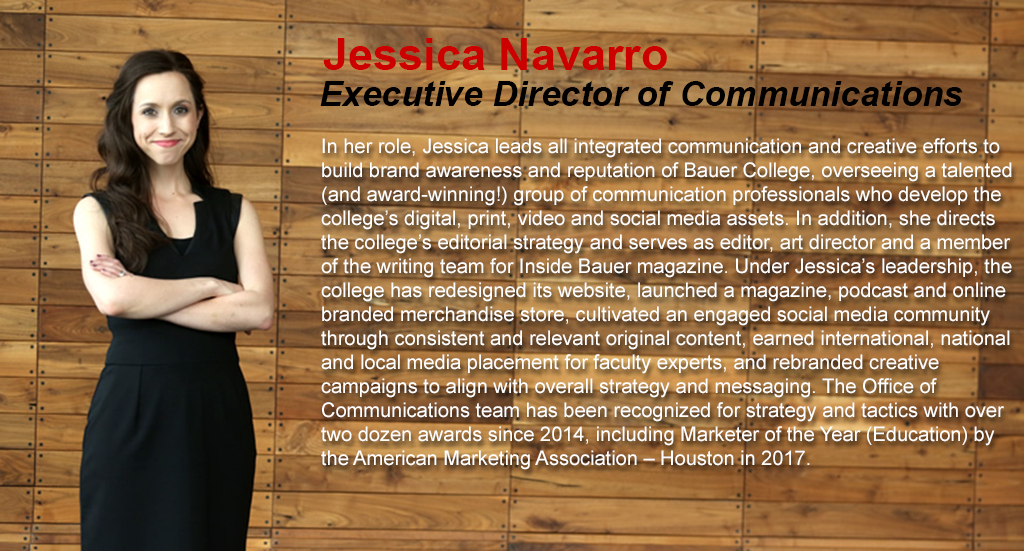 In her role, Jessica leads all integrated communication and creative efforts to build brand awareness and reputation of Bauer College, overseeing a talented (and award-winning!) group of communication professionals who develop the college’s digital, print, video and social media assets. In addition, she directs the college’s editorial strategy and serves as editor, art director and a member of the writing team for Inside Bauer magazine. Under Jessica’s leadership, the college has redesigned its website, launched a magazine, podcast and online branded merchandise store, cultivated an engaged social media community through consistent and relevant original content, earned international, national and local media placement for faculty experts, and rebranded creative campaigns to align with overall strategy and messaging. The Office of Communications team has been recognized for strategy and tactics with over two dozen awards since 2014, including Marketer of the Year (Education) by the American Marketing Association – Houston in 2017. 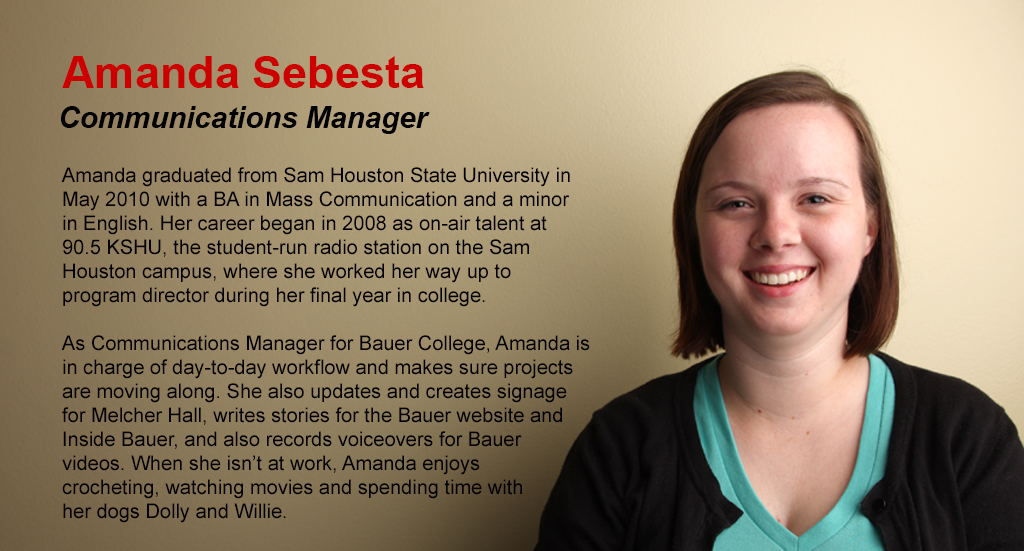 Amanda graduated from Sam Houston State University in May 2010 with a BA in Mass Communication and a minor in English. Her career began in 2008 as on-air talent at 90.5 KSHU, the student-run radio station on the Sam Houston campus, where she worked her way up to program director during her final year in college.

As Communications Coordinator for Bauer College, Amanda is in charge of day-to-day workflow and makes sure projects are moving along. She also updates and creates signage for Melcher Hall, writes stories for the Bauer website and Inside Bauer, and also records voiceovers for Bauer videos. When she isn't at work, Amanda enjoys crocheting, watching movies and spending time with her dogs Dolly and Willie. 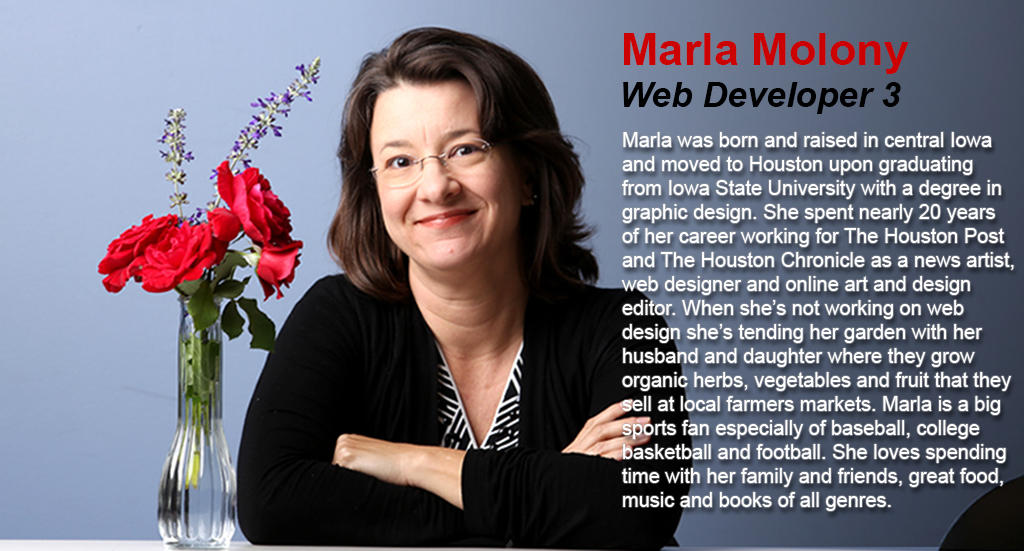 Marla was born and raised in central Iowa and moved to Houston upon graduating from Iowa State University with a degree in graphic design. She spent nearly 20 years of her career working for The Houston Post and The Houston Chronicle as a news artist, web designer and online art and design editor. When she’s not working on web design she’s tending her garden with her husband and daughter where they grow organic herbs, vegetables and fruit that they sell at local farmers markets. Marla is a big sports fan especially of baseball, college basketball and football. She loves spending time with her family and friends, great food, music and books of all genres. 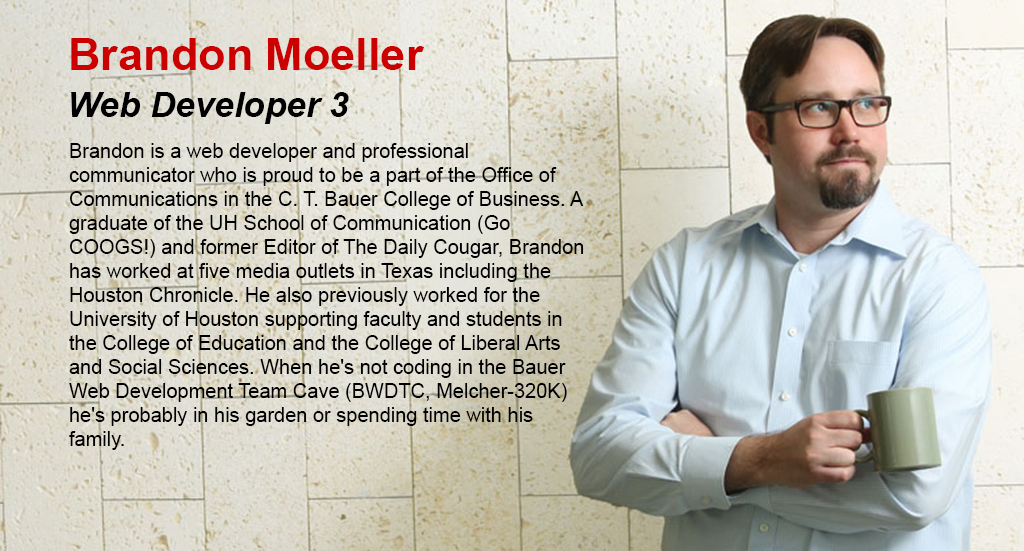 Brandon is a web developer and professional communicator who is proud to be a part of the Office of Communications in the C. T. Bauer College of Business. A graduate of the UH School of Communication (Go COOGS!) and former Editor of The Daily Cougar, Brandon has worked at five media outlets in Texas including the Houston Chronicle. He also previously worked for the University of Houston supporting faculty and students in the College of Education and the College of Liberal Arts and Social Sciences. When he's not coding in the Bauer Web Development Team Cave (BWDTC, Melcher-320K) he's probably in his garden or spending time with his family. 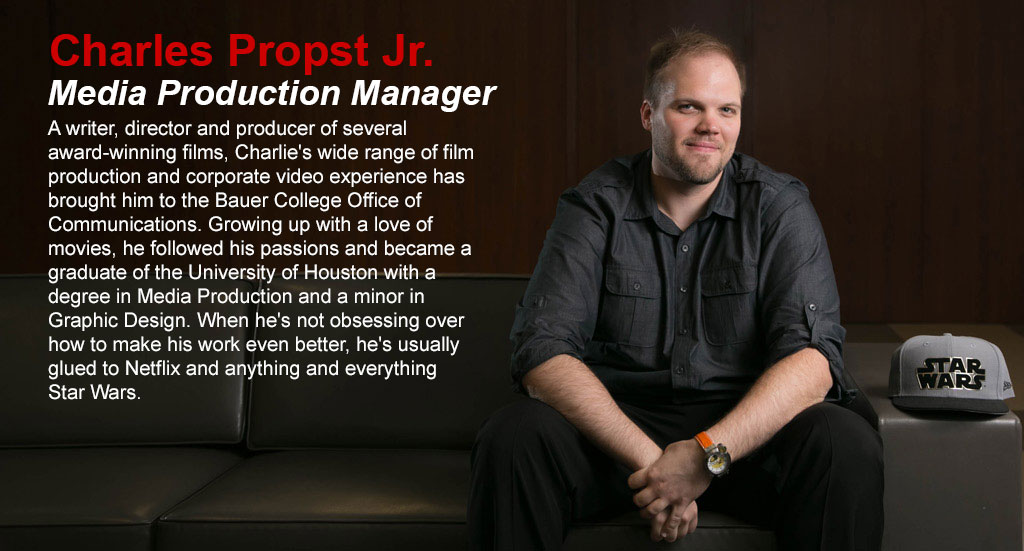 A writer, director and producer of several award-winning films, Charlie's wide range of film production and corporate video experience has brought him to the Bauer College Office of Communications. Growing up with a love of movies, he followed his passions and became a graduate of the University of Houston with a degree in Media Production and a minor in Graphic Design. When he's not obsessing over how to make his work even better, he's usually glued to Netflix and anything and everything Star Wars. 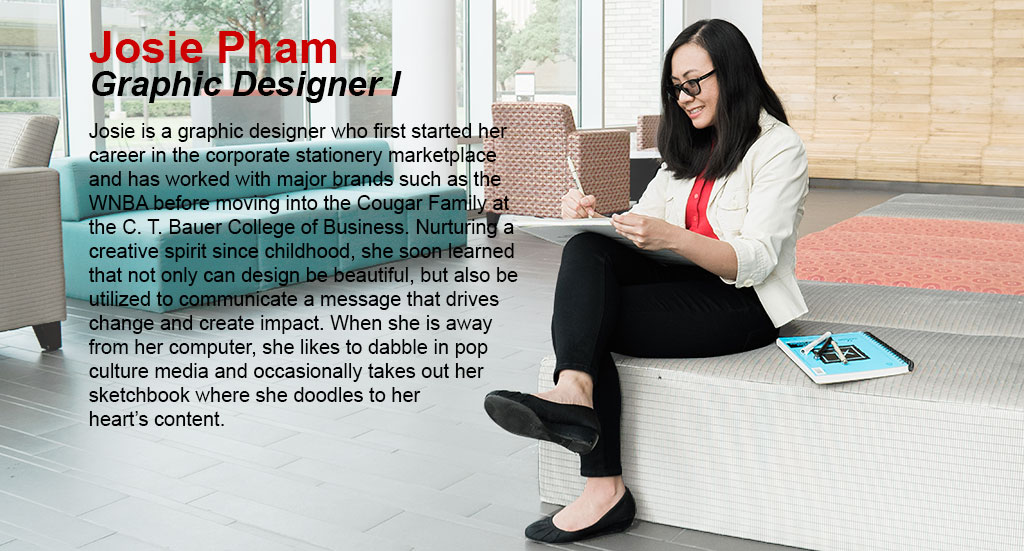 Josie is a graphic designer who first started her career in the corporate stationery marketplace and has worked with major brands such as the WNBA before moving into the Cougar Family at the C. T. Bauer College of Business. Nurturing a creative spirit since childhood, she soon learned that not only can design be beautiful, but also be utilized to communicate a message that drives change and create impact. When she is away from her computer, she likes to dabble in pop culture media and occasionally takes out her sketchbook where she doodles to her heart’s content.